Under The Counter Reverse Osmosis 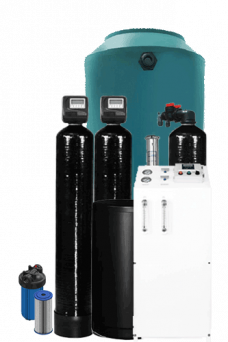 What is Reverse Osmosis? 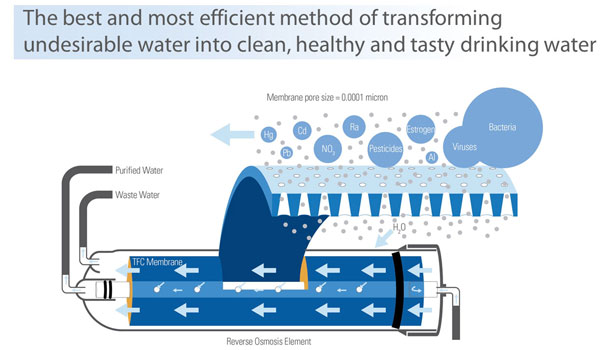 Reverse osmosis, sometimes called hyper filtration, is the most thorough form of water filtration available. This process will allow the removal of particles as small as ions from a solution. Reverse osmosis is used to purify water and remove salts and other impurities in order to improve the color, taste or properties of the fluid. Reverse osmosis can be used to produce water that meets the most demanding specifications for clean water, which is useful for both drinking and industrial purposes.

The following, and more, have all been found in residential water studies:

What is Osmosis? Osmosis is a natural process, known for over 200 years, on which reverse osmosis systems are based. The walls of living cells are natural membranes. This means that the membrane is selective, some materials can pass through, others cannot. The general operation of all RO modules is the same. The feed stream is supplied to the membrane and split into the permeate which has diffused through the membrane, and the concentrate which passes over the membrane, carrying away the minerals to waste.

Figure 1 illustrates osmosis and the selectivity of the membrane. The semi-permeable nature of the membrane allows the water to pass much more readily than the dissolved minerals. Since the water in the less concentrated solution seeks to dilute the more concentrated solution, the water passage through the membrane generates a noticeable head difference between the two solutions. This head difference is a measure of the concentration difference of the two solutions and is referred to as the osmotic pressure difference. This head pressure, converted to the familiar pressure units of pounds per square inch (2.31 feet of water head equals 1 psi), allows the observation of a valuable rule of thumb. That is, that each 100 mg/L total dissolved difference is equal to approximately 1 psi osmotic pressure difference. 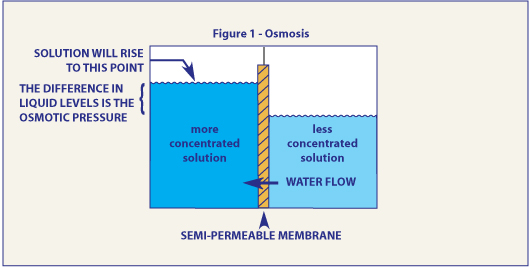 When a pressure is applied to the concentrated solution which is great that the osmotic pressure difference, the direction of water passage through the membrane is reversed and the process that we refer to as reverse osmosis is established. That is, the membrane's ability to selectively pass water is unchanged, only the direction of the water flow is changed. Thus, as shown in Figure 2, a water treatment technique in which the water is being separated from the dissolved minerals is demonstrated. 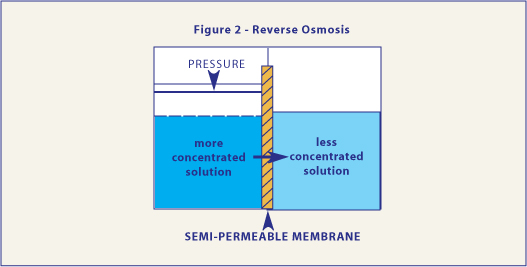 Were the membrane to act as a perfect separator, the permeate would contain 0-mg/L total dissolved solids, no matter what the concentration on the feed side of the system. This is not the case, however. And, in fact, let us consider, for the sake of illustration, 90% rejection to be an average operating condition. By considering the mechanism of salt and water passage through the membrane, it will be clear why complete salt elimination is not possible and how operating conditions can effect permeate quality and quantity.

The membrane's ability to hold back salts while allowing water to pass is based on the fact that the salts are in solution as ions, that is, charged particles. The dissolved salts are in solution as continuous, with a positive charge, and as anions, with a negative charge. A descriptive analogy of what is happening is to consider the membrane to be a mirror. As the charged particles, ions, approach the membrane, they are repelled by a reflection of their own charge. That is, similar charges repel, just as similar magnetic poles repel each other. Therefore, the layer of water immediately adjacent to the membrane is void of charged particle, and it is this water which will subsequently diffuse through the pores and be delivered as permeate. Since the anions and citations are constantly moving around in solution, sometimes they are near enough to each other to be attracted to one another, thus canceling their individual charges. Without a net charge, these particles are free to pass through the membrane.

Although Figure 2 was sufficient to illustrate the basic RO process, the feed and concentrate ports added in Figure 3 are necessary to illustrate a continuously operating RO system. 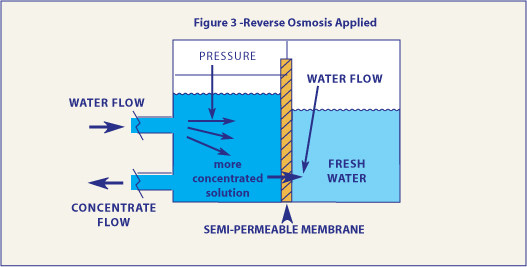 The semi-permeable membrane used RO systems are cast polymer films of asymmetric density. That is, they have a dense barrier layer which is very thin, perhaps 10 millionths of an inch, supported on a more porous substrate a few thousandths of an inch thick. Figure 4 illustrates the different densities in the cross section of the membrane.

Different configurations of membranes have been devised, each offering certain advantages. The most popular membrane configuration is the spiral wound, shown below in Figure 5. 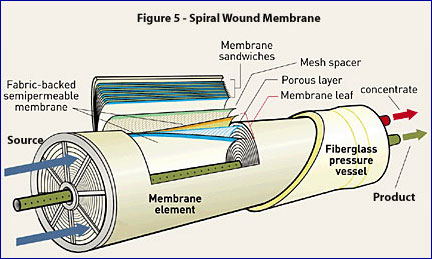 These are assembled by folding a sheet of membrane over a tube, referred to as the product tube, and trapping a screen between the two halves of the membrane. The membrane is bonded to the tube and glued together along the three open edges. Another spacer screen is laid on the membrane and the whole sandwich is rolled tightly around the product tube and then bound with tape to hold it together. This method of packaging membrane provides considerably more surface area per module than the tubular. However, since the feed water must wind its way through the path created by the spacer screen, dirt particles can be easily trapped, so 5 micron pre-filtration is generally recommended.

Low pressure RO operation generally refers to feed pressures of less than 100 psig. This includes most of the equipment capable of being installed under the kitchen sink and those referred to as counter top modules. Figures 6 and 7 define the elements commonly found in these systems and their arrangements.

Although for the counter top Reverse Osmosis modules and some permanently installed units, the storage tanks are maintained at atmospheric pressure - the majority of under-the-sink installations utilize accumulator storage vessels. As water is added to the tank, the air charge is compressed and thus the pressure in the tank rises. It is this elevated pressure that is used to propel the drinking water to the faucet. The pressure in the tank also, however, acts as a back pressure on the membrane, and as tank pressure increases, the differential pressure across the membrane decreases.

Recalling the expressions for water and salt transport across the membrane, as the tank pressure rises, the water production rate drops and yet the salt passage continues unaffected. Thus the quality of the water being delivered drops significantly if the differential pressure is allowed to become too low. Therefore, most equipment included some provision for limiting the storage tank pressure to some value less than line pressure. A ratio of two thirds is a commonly chosen limit, and may be done for a continuous flowing system as shown in Figure 8.

When the storage tank has been filled to the point at which its pressure equals two thirds of line pressure, the permeate is diverted to drain. To conserve water consumption in reverse osmosis devices another type of control called "shutdown" is employed in the design using a shutoff valves and is illustrated in Figure 9.

At the designed-in, present ration, the storage tank pressure will close the valve and prevent further feed to the system. The valve will open again when sufficient pressure reduction is sensed at the storage tank.

Whatever means is used to accomplish shut down, the end result is that the differential pressure across the membrane is eliminated so that water production ceases. Unless provision is made to eliminate the dissolved mineral concentration difference across the membrane, salt passage will continue, creating a high TDS water on the permeate side of the membrane. The phenomena is commonly referred to as a TDS creep